Disclaimer: I did not do this project with the intention of writing this article. However, I thought it would be nice to put this together in hopes that it may encourage someone else to customize their own vehicle.

Now just to put this into perspective. I just purchased this vehicle less than a week ago. It was a brand new 2008 Ford Explorer. In order to begin installing the emergency vehicle lights, I decided to install some Carling Technologies Contura brand switches in the center stack of the dashboard. This was a little bit tricky since vehicle manufacturers no longer make the trim easy to remove. Almost all of the mounting screws, bolts and clips are hidden away and it’s like solving a crime, trying to figure out how to take it apart without breaking anything.

The area just above the cup holders and just below the climate controls turned out to be a perfect location for this installation. On some models, Ford has some accessory buttons located in this area and mine was clean. With the experience I’ve had working on Project Responder, I felt pretty confident about making this happen. The first step was to remove the two 7mm screws fastening the cover over the transmission hump. Next, I used a medium flathead screwd driver to pop out the small cubby hole storage pocket in the arm rest. With this removed, I had to disconnect the power feed to the accessory outlet. With the storage pocket removed, I then removed the chrome trim from the gear shift. Now the entire cover could be removed.

Now with this out of the way, I firmly grabbed the bottom of the vertical trim which runs up past the climate controls, vents and ends at the top of the dash, and gently pull forward to pop the snaps. The bottom of this piece ends up hitting the floor pan trim, so you have to put your fingertips behind the top of the trim and start un-snapping the trim from the top down. Now comes the hard part, getting in behind the console trim in order to disconnect all of the electrical connectors and vacuum lines that run to the climate controls, 4×4 controls, message center (optional accy) and there is a small two wire connector at the top for the airbag disabled indicator. Now comes the fun part, cutting out the holes for the Carling Technologies Contura V switches. Especially when I’ve only had the Explorer for less than a week.

For this operation, I elected to make use of my dremel tool. However, I knew that getting up close to make straight cuts would be difficult at best with just the the dremel. So I ran to the hardware store and picked up an extension cable and some plastic cutting disks for this job. So now the first order of business is to create a template with which to use for cutting out the holes for the switches. I did this with Photoshop. After measuring the dimensions of the switches, I was able to create a rectangle shape on the first layer which was the exact size I needed. Next, I duplicated the layer four times so I would have five shapes on the screen. Since the space behind the trim is not completely open, I had to limit the number of switches to five so they would all fit.

Photoshop then aligned the shapes and spaced them out evenly. This was then printed out and I used a paper cutter to get the template small enough to use. Before I could begin, I had to use the dremel to cut the sprue that held in a plastic housing used to hold two unused wiring harness connectors which are not used on my Explorer. Once this was out of the way, I could lay the template on the back of the console. Using a small razor knife, I cut out each shape exactly. Once all five were cut out, the template was removed and the cuts into the plastic were now my guides for the operation. 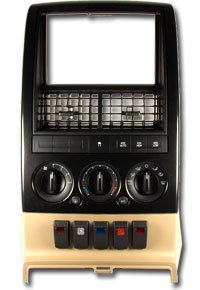 Now it was time to get dirty. With the extension on the dremel tool and the large plastic cutting disk in place, I started by making all of the vertical cuts as close to the cut marks as possible. Then I made all of the horizontal cuts with a smaller cutting disk since the first disk was too large and would have cut past the lines. Now the cutting disk ended up heating and melting the plastic, so this required some cleanup work. Once the cuts were close, I used a small screwdriver and with the handle, punched out the plastic “blanks”. Now the holes were just a bit too small. So it was time for the file and some elbow grease. After about twenty minutes of fine cutting, all five holes were now smooth, flat and most importantly, the right size. After test fitting each mounting location, the switches were ready to be installed. In order to get the panel back into the truck, all of the wiring had to be done while the panel was removed so the cables could be slid through the opening in the dash during the re-installation.

Once the switches were in place, it was time to put the panel back in the Explorer. After several hours of work, it was nice to finally be putting things back together so I could drive the Explorer again. Re-installing was obviously much easier than taking it apart. I started by re-connecting all of the electrical connections as well as the vacuum connections for the climate controls. Next, the two cables were routed through the dash and fed down to the driver’s side floor pan to be routed out through the firewall to a power distribution system. (This will be a topic for another article) Fortunately, the new switches fit into the dash perfectly without any clearance issues. This was my main concern actually. I then took the two cables, coiled them up and tucked them away behind the foot kick panel until the power distribution center is installed.

The transmission hump cover which contains the cup holders was now ready to be replaced. This snapped into place very easily and I replaced the two 7mm screws, re-installed the chrome trim ring around the gearshift and the cup holders. All that was left was the ‘cubby hole’ piece which snapped back in as well. Now it’s time to get the wires hooked up, but again, that’s another article.