What is the ultimate camping excursion vehicle for $40,000?

One of our readers, Thomas, is really big on camping. For a long while, he has been trying to get by with his Ford hatchback, but he now realizes that he is ready for something new and exciting. What kind of car should he go for?

Thomas goes camping several times a year. Sometimes, it’s just simple camping at his local forest. Other times, he likes to go for elaborate trips like large campsites, big events, regional burns or festivals. He started running a theme camp but quickly realized the limits to how much his Ford hatchback could carry.

He has been reluctant to change his ways despite being unhappy with the car. Luckily, his recent move has left him with no choice. His new apartment is far away from the bus lines, so his partner claimed his car for the daily commute. As a result, Thomas is without a car.

His needs are fairly specific. Thomas is looking for a vehicle that could add some visual flair and something that isn’t tough as nails to maintain properly. He is willing to put in the work but is fairly new to it, so something self-sufficient is a bonus for him. At its most basic level, the vehicle should be able to tackle rough terrains like backcountry roads and dirt pathways. For this reason, a 4×4 is essential here.

His budget is around $40,000. For this, he needs something automatic that does not have bad gas mileage.

Expert 1 – Save Your Money For Adventures 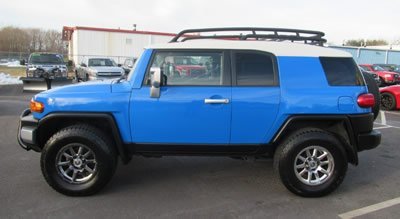 So, Thomas is in a bit of a tough situation. He is looking for a decent 4×4 with enough power, but he also wants something fuel-efficient. Hate to break it to you, Thomas, but that’s just not going to work. Bigger cars are designed to put out more power and are gas guzzlers by design. At that size, there’s only so much a manufacturer can do to keep fuel consumption down. Honestly, the best you can hope for here is something with a highway rating in the 20s range.

The rest of your demands are not too high to meet. I would personally put in my nomination for the Toyota FJ Cruiser. It was released as a retro 4×4 in 2006. It didn’t really gain much attention during its run and was widely forgotten in lieu of more popular options. Lately, that trend has started to shift and it is beginning to gain traction again. This cult following also means that its price is a little jacked up. However, for the kind of car you get, it’s too good of a deal. The FJ Cruiser is a tough 4×4 that can traverse rough terrains, haul any kind of gear, and tow up to 4700 pounds.

You can get a more fuel-efficient model, but it will bring up the base price by quite a bit. It’s better to roll with an older model such as this one with reasonable miles for around $12,000. Then, you can spend the rest of the cash on a trailer and some gear, and you’ll be one happy camper!

Expert 2 – The Van For All Of Your Needs 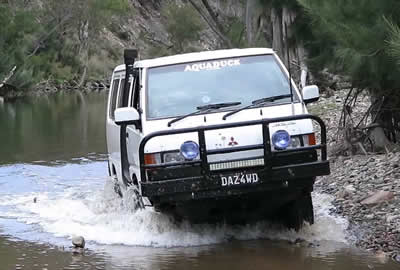 Buying an SUV with space and off-roading capability is a difficult balancing act. You usually have to make some kind of compromise on what exactly you’ll end up getting. Thankfully, with the Mitsubishi Delica, you won’t have to.

The L300 model of the Delica is known for traversing some of the toughest terrains out there. This SUV is a Pajero at heart that has some additions such as a four-wheel drive, a low-range transfer case and differential locks. As an added bonus, you even get spacious seating for seven on board.

For a camping vehicle, you can’t go any better than this. It has all your needs in one neat little package. What’s more, this SUV is extraordinarily cheap. You can get most used models within $15,000.

Honestly, this van can go anywhere, if you don’t believe us, take a look at this video.

Expert 3 – The Van For All Of Your Needs 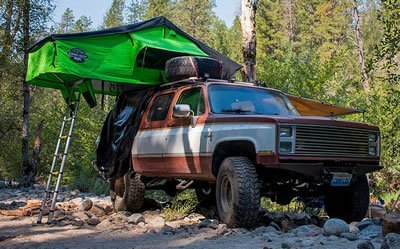 Initially, my mind immediately jumped to a Toyota Land Cruiser. You know those tough, rugged SUVs that rule the country roads. However, as I thought more about it, there aren’t many Land Cruisers that fall within your budget. The ones that do are basically old restorations from the 60s and 70s that aren’t worth going for anyway.

Thankfully, you still have the option of buying Land Cruisers from the 80s and 90s. They’re not too expensive; you can get some for about $5,000 with around 200,000 miles on them with conditions varying from daily driven to street modified.

You’re already well aware of your choices with FJ Cruisers and Delicas, so I won’t bore you with more of that. Instead, I’ll try to offer something newer and more exciting that I know you’ll love. What I’m going to suggest is an off-road race car.

The market is filled with these kinds of premier vehicles. Whether you have your long-travel road trucks or your certified desert-racing SUVs, the market has got it all. Somewhere out there is the dream machine that you’ve always been waiting for.

To get you started, I’ll point you in the direction of the 1973 Chevrolet Suburban. It’s got a great suspension and beefy engine. For only $4,500, it’s only a mere fraction of your actual budget.

Expert 4 – Alarm bells are ringing, lets spend it all 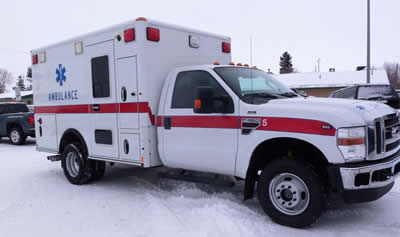 Once you start taking the fun and adventurous route, there’s no stopping where you can actually take it. This is why I’m going to suggest something completely radical – an ambulance. It’s perfect for your needs! It’s mobile, it’s got space in the back, and it can fit equipment in it.

It already makes sense as to why you would want to have a used ambulance as your impromptu camper vehicle. A good 4×4 ambulance will have plenty of space where all kinds of medical equipment used to be kept. This means plenty of space for a small bed or two, drawers for miscellaneous knickknacks, and places to keep your magazines and perishables. It’s also easier to find them in well-maintained conditions because they were under strict regulations.

Unlike most consumer-grade SUVs, these were meant to last for a long time. Due to the serious job requirements of these vehicles, you can expect them to stay in a running condition far longer. They’re also designed to have a sophisticated electrical system, which removes the hassle of rewiring everything yourself.

At around $20,000, the 2010 Ford 4×4 F-350 ambulance seems to be your best bet. It has plenty of storage space as well as cubbies and cabinets. It’s built to last and it runs great. If that’s not enough, you can even go for a roomier variant for $40,000. However, at this point, I would suggest you go for a cheaper option and save the rest of the budget for renovations and miscellaneous gear. This way, you can have the car makeover you’ve always dreamt of.

So what can you do with an old ambulance?  Take a look at the below video to get some ideas of what yours could look like if you fancy a go.  Pretty nice eh?