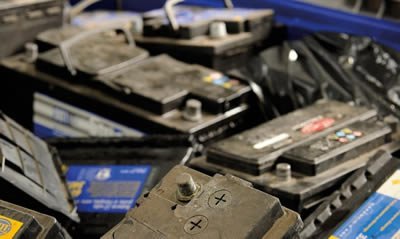 A car or automotive battery, also referred to as a lead-acid battery, contains about 21 pounds of lead, three pounds of plastic and one gallon of sulfuric acid. These items can be toxic if handled improperly, and there is a better solution. It’s not only a nuisance to see old vehicle batteries anywhere, but it’s also illegal to throw them anywhere. Old car batteries are very hazardous to the environment, and it can directly affect you negatively if you come in contact with its contents.

Because there are more than cars in the world than licensed drivers, old car batteries and their afterlife is a serious issue. Even in developed nations, you can sporadically see old car batteries lying on the streets, or occasionally finding their way in the canals. Even more so in less developed countries; they have become dumping sites for used vehicle batteries. Deaths from battery-related lead poisoning have been reported in China, Africa and Vietnam.

A lead-acid battery contains lead, which is a highly toxic substance that attacks the central nervous system. It can cause mental disorders among children and certain types of cancer. Lead metal is not biodegradable when it leaks into the environment. They will remain hazardous to plants and animals that can come in contact; and their harmful effects can be passed to humans from the food they eat.

Another dangerous component of lead-acid battery is the sulfuric acid that it contains. It’s the byproduct when the batteries are used to power engines. It’s highly corrosive, and it can burn plants and animal tissues on contact. If they are not treated well before releasing into the environment, they can cause serious damage to all forms of life. And a lead-acid battery is at least 40% sulfuric acid.

Given this potential hazards from old car batteries, many countries around the world impose laws that penalize people for improper disposal of these hazardous waste. You are even required to pay a deposit when buying a new vehicle battery without turning in your old one. Recycling plants are also built just to take care of old car batteries.

However, many old car batteries from wealthy nations are finding their way to poorer, less developed countries. The United Nations even expressed concern for this damning practice of wealthier nations. The problem is even more aggravated because these poorer countries don’t have laws that protect their citizens from this practice. And they are less equipped to handle the proper disposal and recycling of these hazardous wastes.

You could exchange the old battery when you purchase the new one. Many states now have lead-acid battery recycling laws that require you to switch the batteries. Most auto shops have a chart that tells you where and when to exchange the battery.

In fact, when you purchase a new car battery, there’s this so called core charge that comes with it adding to the cost of the battery. This is required by law. But, if you will return your old car battery to the store where you bought your new one, this core charge should be refunded to you. Of course they would want to see your receipt before paying you the refund.

According to AAA, a car battery contains 21 pounds of lead, plastic and sulfuric acid. And 97 percent of that can be recycled and reused in new batteries. But millions, tossed aside every year, pollute our groundwater. When it comes to old car batteries, it is mandatory to do your part as a responsible citizen and properly dispose of them. A system is in place to recycle old car batteries; all you have to do is ask. Please recycle.

It’s comforting to know, however, that if car battery disposal is handled properly, almost all the hazardous materials in it can be recycled back to good use. The lead can be processed and turn into reusable slots for use in new batteries. The sulfuric acid can be neutralized and return to the environment as clean water, and the plastic can be recycled also.

If you’re the type of person who just doesn’t have time to bring your old battery to the recycling plant or to the auto parts store, please do your community a favor and browse your Yellow pages.

Chances are, car battery recyclers or your local environment office’s number are listed there and they can pick up your battery for you.

Car battery disposal is a serious matter. There are strict laws regulating the improper disposal of used car batteries.

Be aware that you could face a hefty fine if you’re caught throwing your old car battery out. It pays to make a few phone calls to the recyclers or to drive to the auto parts store for proper car battery disposal than face a large fine and damage the environment.

Jim has 20 years of experience working in the automotive industry. Starting out as a qualified mechanic, working predominately on pickup trucks, Jim then moved in to sales with aftermarket parts, before finally managing the sales division of a multi state truck dealership. More recently, Jim has turned his experience, knowledge and skills to writing, and he is our Editor-in-Chief at Pickup World.

Any cookies that may not be particularly necessary for the website to function and is used specifically to collect user personal data via analytics, ads, other embedded contents are termed as non-necessary cookies. It is mandatory to procure user consent prior to running these cookies on your website.