He had recently stated that Tesla ‘may’ reveal the prototype in the upcoming year. And in today’s call, he looked somewhat more sure that the unveiling would take place this coming summer. However, don’t buy your plane tickets just yet, because nothing has been officially announced.

Even though the rumors have been around for a quite a long time, we first came across the Tesla pickup truck during the Tesla Semi release event. Back then, the concept designs of the pickup were definitely futuristic and a little bit daft. Tesla declared that this pickup truck will be big, and powerful enough to carry a general pickup truck in it’s bed, as you can see from the photo released at the same time. 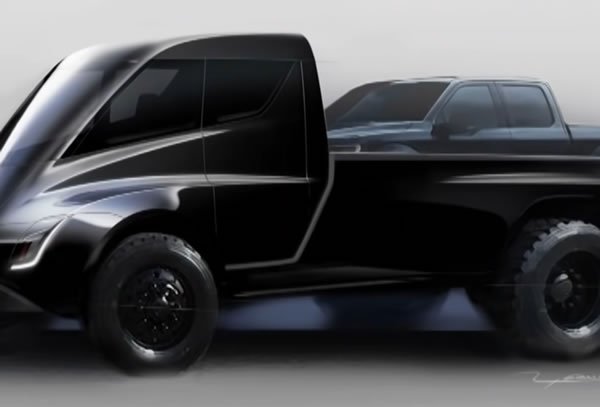 Tesla is not the only electric pickup on the block and we have witnessed more electric pickup trucks hitting the market. Rivian amazed us at the LA Auto Show when they revealed the R1T. The Rivian booth was just past the Ford booth, and every time we strolled by, we witnessed more people at Rivian compared to Ford, even though Ford had a far larger footprint.

It looks like we were not the only ones to notice this, and Ford have recently declared that they also would make an electronic pickup at some point (watch this space)!

Its not just Ford who are eyeing this market, Workhorse also plans to launch their W-15 soon. And of course there are those $5000 Chinese NEV pickups who’d be perfect for campus related activities.

These new improvements have perhaps pushed Tesla to get their production plans going. Tesla, which is used to be the leading company in terms of electric vehicles, doesn’t want other companies to snatch away their spotlight and be first to market before them.

What do We Know About the Tesla Pickup Truck?

Now, the question arises: what have we come to know about the pickup truck so far? Nothing much actually. The rumors go that it will be a large one, accompanied with 6 seats, a big battery to allow towing and long range, high towing capacity, all-wheel drive as well as a 240v and air compressor connectors for your power tools.

Elon states that he has fallen in love with the breathtaking plan and design called “cyberpunk Bladerunner“.

So What Do We Think?

Pickups are already pretty large, and have a lot of space for storing batteries. They would definitely benefit from the high low-grade torque for pulling stuff around, and these electric motors have it in spades. You can make EV motors more responsive for complicated situations, which trucks tend to find themselves in. EVs come with huge batteries that could be used for power tools (interesting slant), or you could even charge your electric truck whilst at work or on-site. Lots of trucks are used in fleets and have comparatively fixed regular range demands. Hence, you can easily work out the range you’d need for your current fleet, based on daily activities and logs.

Commercial pickup truck fleets are all about picking the best economic vehicle, so a truck that requires small maintenance and costs small amounts to keep running would appeal to the fleet manager.

The trouble with the truck market is that brand loyalty is super high, and American companies generate very high-quality trucks, as do the Japanese. Hence, it’s going to be hard for Tesla to make a place for them in the market. However, as I’ve already stated before: “the bean counters could save our world.”

When accountants and fleet managers see an electric pickup truck being more economical compared to their gas-supported versions, companies would switch over really quick, as we are witnessing with the pre-booked orders of the Tesla Semi.

So, if Tesla or some other manufacturer can offer trucks at affordable prices, they’d get a ton of sales. That said, I’m not certain that it is what Tesla is pursuing, as they are stating that the truck would be pretty large, high-performing and so on. However, they could be starting with an “S” pickup, and aim for the “weekend warrior” market who purchase $90,000 F-450’s or $75,000 Raptors right now, and then work towards the commercial fleet-type trucks, at fairer costs.