Ok, so we try the petrol and diesel cleaner that everyone is talking about!

There has been a lot of talk on the web and amongst garages & tuners about the BG range of products and services; in particular, BG 44K for petrol and the new BG 244 for diesel. There is no doubt that BG Products Inc is not only a well established organisation but their reputation is reportedly huge in the US.

Remarkably, their products are so well respected that many manufactures and dealers now use them as part of routine servicing. For example, you could take your Lexus to your local dealer and find that a can of BG44K makes its way in to the tank to clean the entire fuel system and remove all carbon build-up, in addition to the normal scheduled service.

If you are looking for Octane Boosters, take a look at our complete buyers guide for a review of the best 8 available.

Well, the following is taken from the Power Enhancer website and explains more about the product:

“This patent-protected, modern treatment, which is simply added to a full tank of petrol, safely cleans away accumulated deposits in parts of the engine fuel system (including injectors) and from the intake components, intake valves and combustion chambers.

Gone are $100+ garage bills to remove and clean petrol or diesel fuel injectors, or worse, authorised dealers telling you your vehicle requires new injectors with some repair bills running well into four figures. Gone is the need to tear down engines to remove built-up carbon deposits. In fact, BG 44K® as well as other BG products now feature as part of routine car servicing by established car manufacturers and their dealers networks.

With a recommended use of every 10,000 to 12,000 miles, one treatment is all that’s required for you to notice the difference in starting and engine running. Most notice a difference within 1/3 of a tank through the treatment. 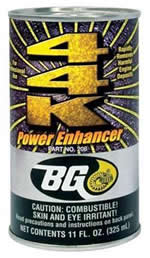 Please don’t confuse BG 44K® with off-the-shelf injector cleaners. There is no comparison and no better product available on the market today. Other cleaners don’t provide the necessary cleaning power to completely remove deposits, gum and varnish from fuel injectors. Furthermore, they barely touch the carbon deposits that accumulate over time. At best, they maintain a cleaner fuel system; the problem being that’s it not convenient nor cost effective for you to have to add a cleaner every time you fill your vehicle with fuel.”

This is a bold statement but unfortunately a true one. Most off the shelf cleaners are actually “fuel conditioners” and even though they play a role whilst in the fuel tank, they seldom have any long lasting effect, and that is because they don’t touch the carbon or hard gum deposits. What they tend to do is help “improve” the quality of the combustion and reduce emissions, usually to help pass exhaust gas emissions tests, but that’s all.

“Similarly, don’t confuse BG 44K® with “magic” additives that claim increased horsepower or wildly improved fuel economy. What BG 44K® actually does is restore the performance of your engine back to when it was new. Lost performance and degraded fuel economy will be restored and your vehicle will perform as it did when it left the factory.”

This is refreshing to see. A company that is actually realistic on the expected results of their products. In our business, we see too many over exaggerated claims of performance, reduced MPG etc.

What makes BG 44K® so effective?

A main contributory factor is a key active ingredient called Polyether-amine. As acknowledged by the Engine Manufacturers Association (www.enginemanufacturers.org), PEA as it is commonly known, is the only recognised and approved chemical compound for dissolving and removing hard baked carbon deposits.”

We are very well familiar with PEA chemistry and can confirm that it is the only proven compound for safely and effectively remove carbon build-up in a combustion engine.

So how does this make BG 44K® significantly more effective than other cleaners or fuel alone?

Well, the amine family of chemicals contain Nitrogen so by simply carrying out a titration test to measure the levels of Nitrogen one can determine the effectiveness of the product.

FACT: Internal combustion engines are inefficient and whilst this remains the case they will accumulate deposits. Whilst steps have been taken to include detergents in fuel, unfortunately, they DO NOT contain enough Polyether-amine based chemistry to keep an engine free from deposits.

BG 44K® does contain a strong Polyether-amine based proprietary formula and the results speak for themselves. We would urge you to search on Google, where you will find many links to websites owned by car manufacturers and dealers supporting the use of BG products, not least, BG 44K® and other Total Deposit Control® products. You will also find a wealth of positive feedback and testimonials from those who have tried and continue to use BG 44K®. BG are experts in deposit control and removal for the combustion engine and have lead the way in this field for years.

How You Can Verify It Works Too – Our Challenge to You… 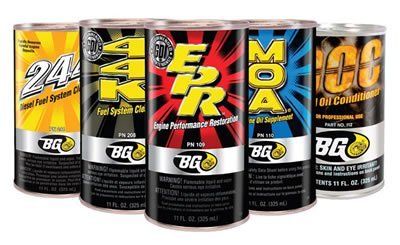 If the own a petrol vehicle then before adding the contents to your tank of fuel, remove one of the spark plugs from the engine and shine a torch down the spark plug hole. You will notice that the top of the piston is black and coated with a carbon build-up. Similarly, the valves and other parts of the internal intake system are likely to be in a similar condition (see images below). Now add BG 44K® to a full tank of fuel and drive the car normally. The carbon will start to dissolve and will be removed through the normal engine combustion process.

After you are 1/3 of the way through that tank of fuel, remove the spark plug again and shine a torch down the spark plug hole and re-check the condition of the top of the piston. You will notice that much of the carbon is removed and that you will clearly see signs of a cleaner piston and without deposits. After 1/2 to 3/4 of tank of fuel, all you will see is a clean piston with no carbon deposits. We were even able to read the part/serial number on the top of the pistons in our test vehicles! Not only does it thoroughly clean the entire fuel system but it also removes all carbon deposits. “

Ok, so we took up this challenge and ordered a can of BG44K for our Ford F150 (petrol) and BG244 for our Chevrolet Silverado (diesel) test vehicle. The results were interesting to say the least.

We need to mention at this point that these products come in cans and not easy to pour bottles, which we would have preferred. However, disposable funnels were provided and we found that they did the job without creating a huge mess. As per the instructions, we emptied the contents into the fuel tanks respectively and filled up with fuel on top.

For our tests, we just drove the cars normally – general commuting and so on. What became apparent very quickly with the F150, after approximately 50 miles, was that it felt much smoother. Furthermore, the tick over when at standstill was smoother. We weren’t expecting a result as quickly but we put this down to the high concentration of PEA, which although is still very safe for the engine, it is not cheap to produce. 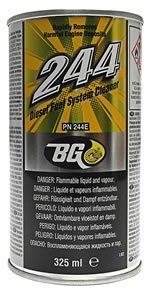 Because of the quick results, we decided to pull the plugs out again after only 100 miles and check for carbon build-up. Sure enough, it was almost gone with some traces left but the components were mostly back to bare metal. We were impressed. A check after 200 miles revealed completely clean piston tops. The engine note was also notably quieter; again, this is down to the carbon removal.
Overall the car felt great, was picking up speed quicker and was much smoother. Now, let’s not fool ourselves – it hasn’t gained an increase in performance over factory figures, but more accurately, has restored the engine back to the power it had when it left the factory.

The BG244 on our Silverado gained similar results. It just picked up smoother and was more responsive. There also notably less clatter. But what really impressed us was the reduction in smoke both when the turbo kicks and at higher RPM.

We accept that these aren’t the most scientific of tests but for these type of products we are firm believers in gathering empirical data rather than squatting over an engine dyno. After all, these particular cleaners were not exactly aimed at increasing performance. Instead it just so happens to be a bi-product of a cleaner and thus more efficient engine. As such, we are confident that both BG44K and BG244 do what they say on the tin, more so than any other injector cleaner or carbon remover we have used.